ESP EPISODE 4:  THE IDES OF MARCH: THE TOP TEN TRAITORS OF TRUMP

Dateline Monday March 15, 2021; Saint Petersburg Florida.  Episode Four of  “Extra Sandini Perception” about “The Ides of March, the Top Ten Traitors of Trump” will be taped live today, Monday March 15 at 7PM West Coast, 10PM East Coast.  The list is below.  How does it match up with your own list?  You can join us live on Spreaker by following this link in any browser at the appointed time.  Thank you we hope you will join us for this timely erudite discussion. 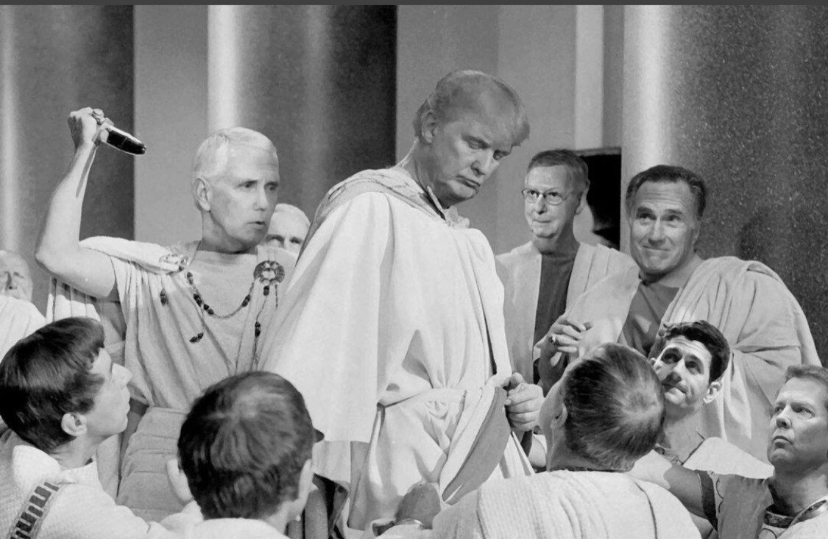 In go the knives! This Ides of March:  let us not forget the traitors to the Patriot cause.

The Ides of March has always been a very strange day to me.  I remember growing up and sitting at the breakfast table and having my Mom remind me of the date before I went to school that day.  She would say:  “Beware The Ides of March,” telling me that it was the date of the murdering of Julius Caesar and to “watch my back.”  She’d also quip “Et tu Bruti?”.  It’s a good time to reflect on the traitors in the life of President Donald Trump.

Here is my best guest approximation of the Top Ten Traitors in Trump’s life. 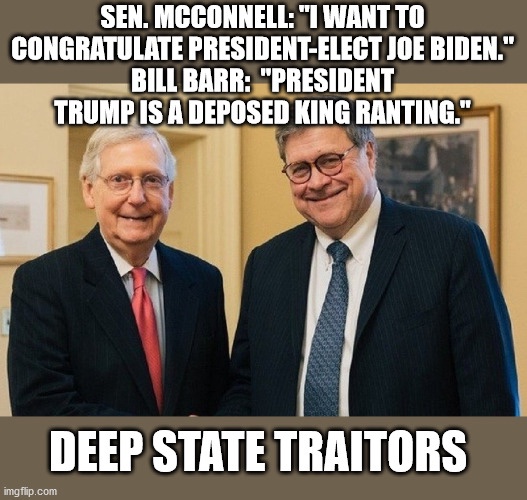 Chosen by Trump to drain The Swamp after Sessions imploded, Barr was an equally abysmal failure. While he promised to help clean up the FBI, and launched the special investigation into Comey and his merry bad of seditionists, Barr came up with “the big donut.” It’s my opinion that “Billy Bagpipes” was compromised right after he publicly declared war on AOC and The Squad.  Of course Barr famously blamed Trump for the so-called “insurrection” and refused to prosecute election fraud which resulted in the election being stolen from Trump. 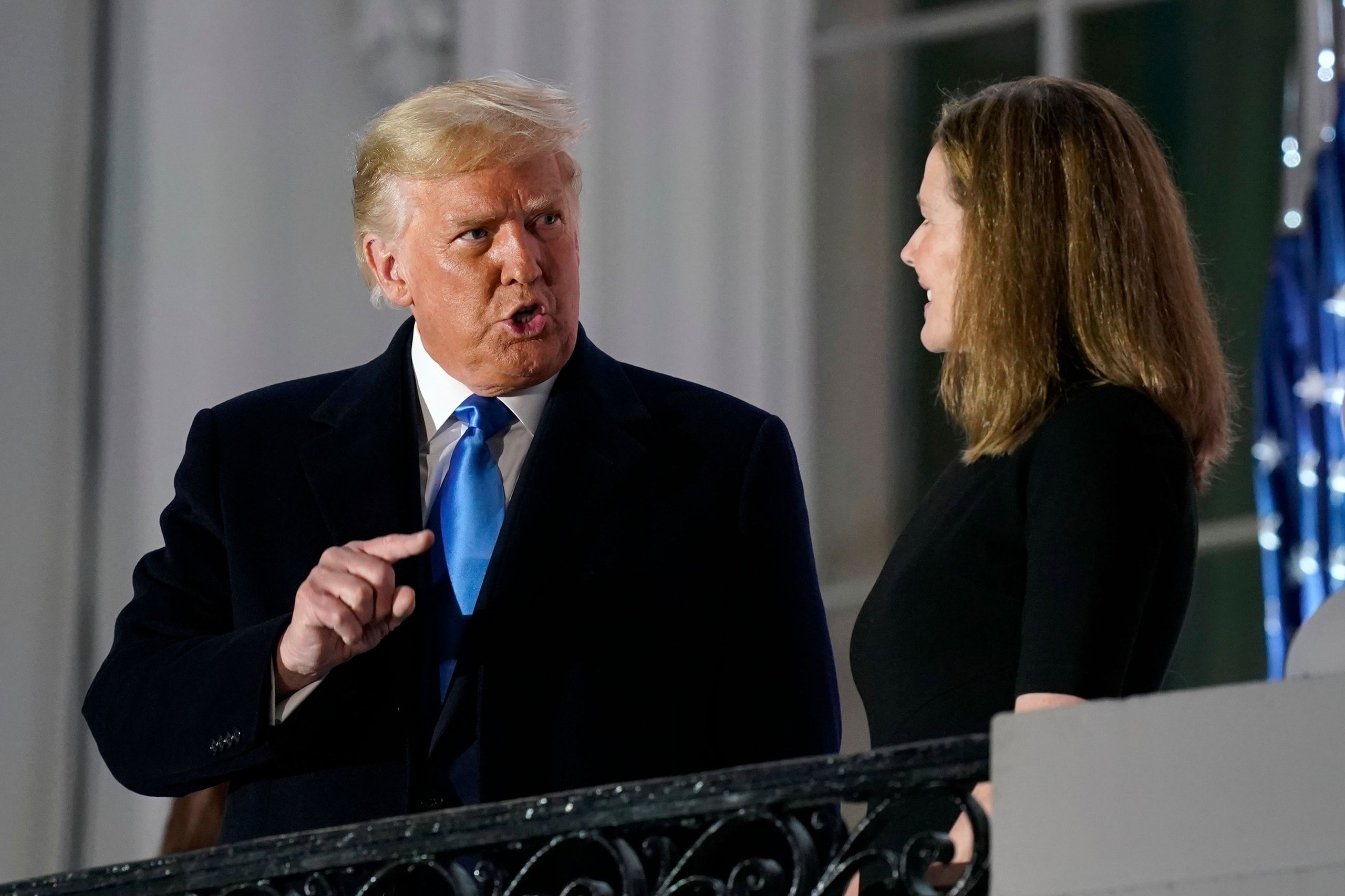 Amy Vivian Coney Barrett was nominated by Trump to the Supreme Court on September 26, 2020.  Trump fought very hard for her, a supposed conservative constitutionalist.  She’s famous for not taking notes during a blistering nomination process led by rabid pro-abortion Democrats.  Due to a lot of hard work and persistence by Trump, she was confirmed October 27, 2020.  It didn’t take long for her to show her true colors.

Following the stolen election Barrett was famously a part of the Supremes who refused to take up any of the clear cases of the election fraud brought by the administration.  Going through the list she’s probably the most beautiful back stabber in the bunch. 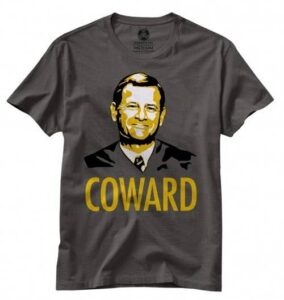 This T-Shirt is available from Glenn Beck.

Roberts was the Bush appointee who many expected to support challenging the election results.  When Trump needed him most Roberts was AWOL.  Many believe Roberts is compromised.  Attorney Lynn Wood recently said:

““I have also received credible evidence of serious wrongdoing by high-ranking government officials which I have brought to the attention of the public and to federal law enforcement officials. The evidence of wrongdoing includes evidence of potentially serious crimes perpetrated by the Chief Justice of the United States Supreme Court.” 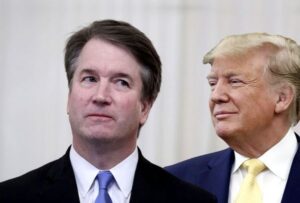 Salon reports Kavanaugh, along with Neil Gorsuch, is the target of Trump’s ire for siding with the majority which ruled on July 9, 2020 that the state of New York must be given his tax returns as part of a criminal investigation.  What Trump’s tax returns have to do with anything is anyone’s guess.

Cavanaugh went through a grueling nomination process during which Trump stood by him.  So much for gratitude. 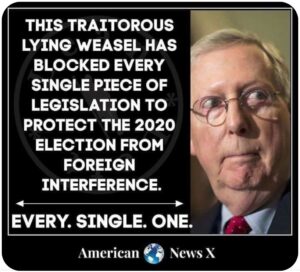 Following the Antifa instigated mobbing of the Capitol, Senator McConnell blamed Trump.  This was after he used Trump to raise funds and win reelection.
6.  Paul Ryan 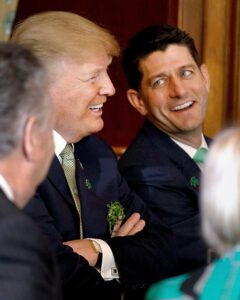 While many credit bringing home Wisconsin in 2016 to the former Speaker, he also didn’t do a damn thing while he was in charge for 2 years.  With mainstream Republicans controlling both the House and Senate, and Trump in the Whitehouse, it might be said that no so-called Conservative has done more damage to Trump’s agenda than Paul Ryan.
7.  Mitt Romney 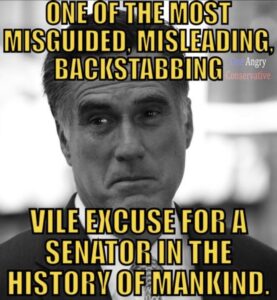 On March 3 2016 Romney delivered a blistering anti-Trump speech.  According to Wikipedia: “Romney’s speech represented an almost unprecedented attack by a major U.S. party’s most recent presidential nominee against the party’s current front-runner for the nomination.”  Trump dismissed the comments, criticizing Romney for his losses in the 2008 and 2012 presidential elections and for “working with the establishment.” Romney has stuck in the knife many times hence, including his vote *for* the second impeachment of President Trump. 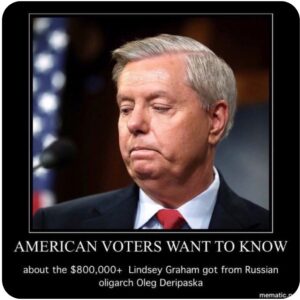 I think this pretty well sums up the feeling inside the Republican Party. 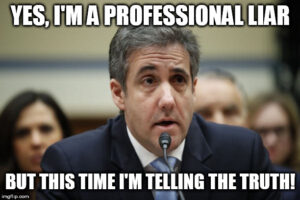 Cohen goes back a while.  In July of 2018 Trump Attorney Rudi Giulliani said about Cohen:

“You’ve got a really bad guy here … What the hell are you picking on me for saying [Cohen] was an honest, honorable man when I didn’t know he had recorded a conversation with his client? He was shaking people down for money, he was lying about what was on a tape and manipulating, doctoring tapes? … I didn’t know any of that. George Washington didn’t know Benedict Arnold was a traitor.” 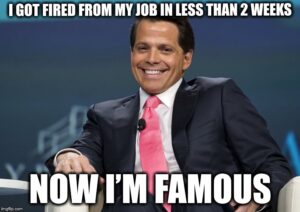 President Trump’s former Communications Director Anthony Scaramucci now believes that his former boss should be in jail.  According to Yahoo Finance Scaramucci said about Trump:

“I predict that he will go to jail for sedition and the causing of this insurrection … We had the American president of the United States not accepting a peaceful transfer of power, abusing the vice president, and then calling for his supporters to incite an insurrection and storm the Capitol Building … [Trump is] “the most useful idiot to the Russian government,” adding “what he did yesterday in the spectacle that he provided on the world stage is nothing but wonder and joy for our adversaries.”

Our segment “Extra Sandini Perception” will be taped live today Monday March 15 at 7 PM West Coast, 10 PM East Coast.  You can join us live by following this link in any browser at the appointed time.  Thank you we hope you will join us for this timely discussion.