Extra Sandini Perception (ESP) is a regular feature of the Jayne Carroll Show.  This Monday April 5, 2021 we will discuss transhumanism, and its potential effects on the legal system.

Since our last episode two main ideas have stuck in my head.  One is that our Constitutional Republic is under threat from a corrupt justice system.  The other is it’s potential salvation using technology.

Our society is founded on the principal that we are a country of laws and not men.  When this axiom breaks down citizens are made to feel that there are two classes of people:  those above the law and those that are beneath it. 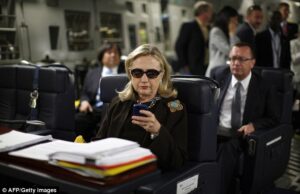 Hillary Clinton famously took a hammer to her cell phone and was never prosecuted for it.

Take for example the case of Hillary Clinton and her deleted emails, the bleach bit wiped server, and the destruction of evidentiary cell phones with a hammer.  Is there a person alive who believes that she is not guilty of some crime, the least of which would be obstruction of justice?  Certainly not.  This is abuse of power by district attorney’s at the highest level exercising what is known as prosecutorial discretion.  The prosecutor essentially has God powers:  This one shall be charged and this one shall not.

As an elected official who owes political favors, a DA may decide this not based on what is best for the society he has sworn to protect, but whether he will be reelected or promoted,  Additionally a DA might be motivated by coercion, a form of blackmail by which with a wink and a nod, someone lets the DA know that his own secrets will be exposed should he choose to pursue a particular case.  There is indeed a conflict of interest, and that conflict of interest undermines the foundation of our free society. 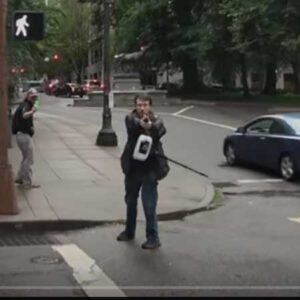 MIke Strickland pulls a gun to defend his life against a violent Antifa mob.

Witness the case of Michael Strickland covered extensively by journalist Victoria Taft where he was found guilty of multiple felonies merely for pulling his properly licensed concealed carry firearm to protect himself against a gang of Antifa and Black Lives Matter (BLM) thugs.  A DA simply drums up a bunch of highly partisan witnesses and coaches them into witness statements.  Make the perpetrators the victims:  “Strickland started it and I felt threatened.”  A Democrat Party machine, the Multnomah County District Attorney’s office creates a reality that bears no semblance to truth.  What we we are creating is a hight prejudicial fiction, with DA Kate Molina closing one eye to the real danger Strickland was in, while ignoring the obvious violence that would have been perpetrated upon him.

This denies Strickland his natural Right to self protection as enshrined in the Constitution.  This Right goes back to the Age of Enlightenment.  It’s what makes us free men.  And by making a public example of this in the Liberal Mainstream Media, every Constitutional Conservative is chilled.  We feel less like free men, and more like the the vassals and serfs of the Middle Ages who will take what is given to us:  or face a loss of freedom.  The result is sand in the gears of the free society, which I fear may be the the catalyst of the demise of The Republic.

Further let’s examine the persecution of the participants in the so-called “Capitol Insurrection.”  Our Federal Bureau of Investigation (FBI) and all of the other corrupt three letter agencies refused outright to investigate clear evidence of election fraud.  Meanwhile agents are busy breaking down the doors of TEA Party grandmas who did  nothing more than take selfies with their flip phones inside the rotunda.  This use of the so-called “Justice System” as a bludgeon to stifle any opposition to socialism (communism) or globalism will be, in my opinion, the death nail of our free society.

SCIENCE AND TECHNOLOGY:  OUR HOPE

In searching for a cure, look no further than the effect forensic sciences have had during our lifetimes.  Massive reductions in crime have occurred because criminals know they can not get away with it.  DNA has changed everything.  Every act leaves a trace and the forensics departments have caused an amazing hesitancy of potential criminals.  Bad people who might ordinarily “silence” an acrimonious spouse rather than simply divorce them, are now thinking twice.  The net effect is that the potential for the truth to come out in a trial has increased.  This is despite the plethora of prosecutorial malfeasance against conservatives that I have described above. 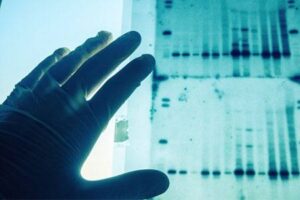 DNA Forensics have changed the way crimes are investigated. So will the the evolution of the Brain Machine Interface being pursued by Elon Musk, Mark Zuckerberg and others.

My conjecture and hope is that the Brain Machine Interface (BMI), an artifact of the Transhumanism Movement will put an end to the shenanigans of rogue partisan prosecutors like Molina (and Barr for that matter).  Those who missed my previous episodes which discuss this device and technology may want to refresh their memories. Elon Musk through his company Neuralink is producing a device which will be able to read your thoughts directly.  In its current incarnation Neuralink will be a one inch carefully drilled hole in your head that dives straight down to your grey matter and stops.  A fine multitude of electrodes are then inserted between the synapses of your brain and are able to read their tiny electric signals.  The information can then be broadcast to a multitude of devices that will be able to read your thoughts via blue tooth.

Think it’s pie in the sky?  Think again,  Musk is successful at everything he does.  For example watch a video of him re-landing the first stage of a rocket on a pad to reuse it here on earth.  This was something unthinkable during the Apollo program and now it works: every time.  By my calculation right around the time 5 years from now when Musk has us on Mars, he’ll be able to bring you what you want for dinner without you’re having to ask for it.  I’ll be 63 years old at the time and perhaps just collecting my first social security check. 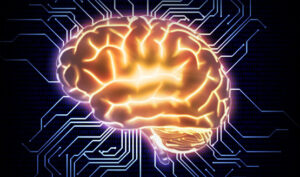 In the future a Brain Machine Interface (BMI) will allow for direct access to your memories of a crime by legal authorities.

People shudder at thought of these devices being installed in their craniums.  But it is my conjecture that they will go along with it.  Take for example the invention of the Graphical User Interface (GUI) and mouse replacing the keyboard.  From there we’ve evolved to a place where voice commands have Siri start the coffee, and Alexa immediately warn you when there is a porch pirate at the front door.  These are only small examples of a continual spectrum of improvement in terms of the speed, fidelity and accuracy of our ability to communicate with what what was once thought to be inanimate chips of silicon; and gold and silver coated components.  Transhumanism,  the Star Trek “Borg,” is being born in our lifetimes and people seem blissfully unaware and unconcerned. 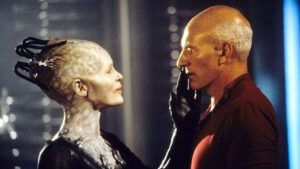 TRANSHUMANISM AND THE LAW

The ethical dilemmas of this technology are multifold, for example, what will be private thought and what will be public thought?  Its effects on society will be unimaginable and mind mind boggling.  However, one thing which seems certain; just as finger prints, lie detectors, and DNA have made their way into the complexities of the legal system; so will Elon Musk’s Brain Machine Interface.  While one might be rightfully frightened by the prospects of the huge potential of violations of the Fourth Amendment, this coin is not without it’s flip side:  TRUTH and fairness may once again begin to prevail in our legal system. Hallelujah. 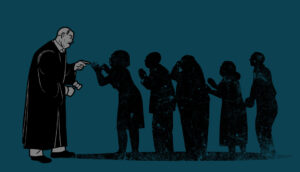 Will the judges and legal professionals of the future have direct access to your mind?

With a Brain Machine Interface it may no longer be possible, for example, for a person to lie in sworn testimony.  The state of mind that a person has when committing a murder may no longer be conjecture.  And poignantly, whether Bill Bar is avoiding prosecuting James Comey because he is being blackmailed by FBI knowledge of a past horrid affair, will be perhaps knowable be all.  With the bad, may also come the good.

What do you think?  We will discuss this matter on the Sixth Episode of ESP on the Jayne Carroll Show this Monday at 7 PM West Coast, 10 PM East Coast.  Join the conversation live by clicking here.

One thought on “ESP EPISODE 6: OUR CRUMBLING REPUBLIC AND IT’S SALVATION”